The Differences Between Cryoskin and Coolsculpting 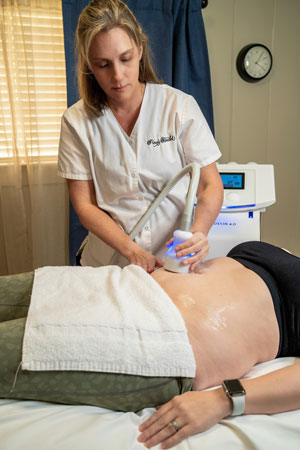 Cryoskin is the elimination of fat cells through the concentrated application of cold and heat, a process known as apoptosis. The treatment is non-invasive, painless, and uses a wand-like instrument to glide over the targeted areas. There are three distinct Cryoskin treatments at Purely Kneaded; CryoSlimming, CryoToning, and Cryoskin facials. All three treatments use essentially the same technology, the only difference is the setting to which the wand is programmed.

To begin, CryoSlimming focuses on a specific area of the body at one time, and usually has the best results on the stomach, thighs, arms, and the back. In a standard CryoSlimming procedure, heat around 104ºF is applied to the problem site for 2 minutes, followed by 12 minutes of cold at 18ºF, and the treatment typically lasts around 30 minutes. Three to five treatments per area are recommended for best results, with treatments spaced out at two week intervals. This is the recommended interval so that the fat cells can pass through the lymphatic system, where they eventually get flushed out of the body.

Another form of Cryoskin treatment is CryoToning, which works by chilling subcutaneous fat, or the layer of fat just below the skin. As the fat is cooled, blood vessels expand and collagen production is stimulated, breaking down the fibers that cause cellulite dimpling. More effective for tightening loose skin and eliminating the appearance of cellulite, CryoToning also helps reduce signs of aging. The procedure typically lasts 20 minutes, with 3 to 5 sessions for the best results. However, unlike CryoSlimming, multiple areas can be targeted in a single session.

The final form of Cryoskin treatment is the Cryoskin facial, and it can be thought of as a kind of non-surgical facelift. Specifically designed to tighten the face, neck, and chin, the treatment does so by stimulating collagen production. Fine lines and wrinkles are reduced, skin texture is improved, and pore-size and skin elasticity are increased. Tthere is no downtime after treatment. 3 to 5 treatments are recommended for best results. Cryoskin is not a weight loss solution. It is best suited for those in good shape who wish to subtly slim, tone, and eliminate problem areas on their bodies. Just remember, Cryoskin treatments should by no means replace a quality diet, exercise, and healthy living.

Contact Purely Kneaded today at (775)451-7002 and learn more about how to get the body you’ve always wanted today!

CoolSculpting, a non-surgical cooling technique used to reduce fat in selected areas, is also based on the aforementioned science of cryolipolysis. It works best on the inner and outer thighs, upper and lower abdomen, love handles, arms, chin, back, and underneath the buttocks. It has also been shown to reduce the appearance of cellulite on the arms, buttocks, and legs. It is a non-invasive procedure that requires no anesthesia, needles, or incision, and it typically lasts one to three hours.

A trained healthcare provider will use a specially designed handheld device to treat the targeted areas. A gel pad and applicator are applied, and controlled cooling is delivered to the targeted fat. Unlike the Cryoskin wand, the device remains stationary throughout the procedure. Though pain is minimal overall, there may be some feelings of tingling, stinging, pinching, pulling, aching, or cramping during the procedure. Recovery time is minimal, and normal activities can resume right after the procedure. Best of all, there is a 20-80% fat reduction in the treated area following CoolSculpting treatment, though these results may not be noticeable for three weeks.

Some post-treatment temporary side effects include swelling, bruising, redness, aching, cramping, and tenderness at the treated area. Like Cryoskin, CoolSculpting is not a weight loss solution but an effective means of eliminating body bulges in those already near their ideal weight. It is not recommended for those with a history of Raynaud’s disease, those with severe sensitivity to cold temperatures, or those with cryoglobulinemia, cold agglutinin disease, and paroxysmal cold hemoglobuinuria (PCH).

Cryoskin vs Coolsculpting: What Should You Choose?

Because both Cryoskin and Coolsculpting are similarly effective, the primary difference between the two is cost, efficiency, and method. CryoSlimming, CryoToning, and Cryoskin facials are much shorter procedures than CoolSculpting (20-30 minutes vs. one to three hours), but they do require three to five sessions for best results.

CoolSculpting, on the other hand, only requires one procedure. But with that comes perhaps the most important difference between the two procedures: cost. With the price of a CoolSculpting treatment depending on a number of variables, including the size of the treatment area, the size of the applicator, and desired outcome, cost typically ranges from $2,000 to $4,000.